The ghost is not gone. She is haunting me. You know the ghost I mentioned in previous blogs that lies within myself. She RUNS from relationships. Physically RUNS. I tried to be brave. I tried to end it. I said the words. But here you are, as if I’m in heat, chasing me through the dang store. I liked to be chased. Not necessarily by someone I told not to chase me… Thank goodness I have a sister who will put on a show with me last minute as I call her in whispered distress. ‘I need you to stay on the phone with me… if I say the word sunflower, I want you act out a level 10 emergency and I will put on my best fake nurse performance and run to the car’. I shouldn’t of chose today to claim my free kind bar with my coupon… gluttony got the best of me. I won’t make that mistake again.

I did a bad thing. I played hot and cold with you. It’s a little game people play when they aren’t too interested in you but they give you attention here and there to string you along in case they get bored… I shouldn’t have done that. I know that now. I tried to correct it by being blunt and telling you how I felt. Yet here you are still pawing at the hem of my skirt as if I never left. Why? Word of advice, if the faucet is running hot and cold, SHUT. IT. OFF. Do not entertain someone who is playing games with you. This is your life, not a game. If they are entertaining multiple people SHUT. IT. OFF.

You don’t have to be rude about it, just politely decline anymore advances and show yourself some respect. Women are attracted to people who love themselves, respect themselves, have values and standards. When you pursue someone who has made it clear they aren’t interested in you, then you are giving them permission to use and lose you. Don’t be that person. I’m sorry I was that person to you, I’m still growing myself and will heed my own advice.

That ghost came to protect me from things like this. She has seen this before and knows EXACTLY how this goes. So she helps me disappear before the crazy comes to get me. I attract crazy… or maybe I create it? They don’t start out that way. But they end that way. It’s a mystery to me but for right now I’ll let my sympathetic nervous system take over. My heart is currently trying to escape to walls that enclose it as I run frantically through the market like an animated cartoon character with James Bond moves. Weaving in and out of aisles, and hiding behind cereal boxes.

You know that old saying, “People don’t change”? Well that’s incorrect. Before posting those memes or quotes do yourself a favor and fact check them. Who said that? Were their words evidence based? What credentials does the person posting hold?

I testify that change is possible. The relationships you have can be mended, whether with your children, spouse, coworkers, friends, change is possible. You also have that extra tid bit added onto the saying, “people only change if they want to”… hmmm. That’s part of it but it’s only a half truth. People can change with a nudge in the right direction, encouragement, support, advice, and most of all RESPONSE!

One of my very favorite movies is War Room. If you haven’t seen it, add it to your watchlist! The story line is based on a married couple who are in the thick of it, constantly bickering, forgetting why they ever got married in the first place. An older woman comes into play to counsel the wife on how to create change in her relationship. The thing that happens here is that the counsel given to the wife was to change her own behavior. She had to change the way she acted and responded, she changed her life and worked on herself before her husbands behavior followed. And if it had played out another way she could’ve just left high and dry with her new found self. I think this is very wise information. No it doesn’t work every time, but it’s the best fighting chance for that change to happen.

If we have people in our lives that have continued behavior that effect our own lives, our response to that can change everything. I once went through a behavior modification course to work with people suffering from developmental disabilities. We were taught how to modify their behavior because most came from rough situations and displayed negative responses to situations, such as self mutilation when they felt they had done something wrong. The system for correction was categorized by cognitive function. I took this information home with me and practiced it on my own kids. It worked! It included praise, correction, consequence, and a way to respond to the situation in the future.

I feel like we too often forget our children are still learning, they need to know how to respond to future situations they are disciplined for. Instead of doing this do that! The way we respond to behavior displayed can change EVERYTHING!

It also works for behavior we want to see more often too! I remember being a young girl and having to do chores, one night I wiped the kitchen table off. I wasn’t expecting it but my mom walked by and said, ‘You did a really good job cleaning off that table Annabelle!’… you better believe that for the next week I cleaned that table every night even if it wasn’t on my chore list because I was the best dang table cleaner in the house! Praise the behavior you want to see more often. Change the way you respond to negative behavior, provide correction and consequence when need, and give an alternative for future mishaps.

Multiple personalities? Maybe… I like to name them so that I know who I’m talking to when there’s another side of me that decides to crash the party. My washer door broke last night, I called upon Darby, my butch side to help me fix it. Darby’s been with me since about age 13. She’s frickin handy but don’t take her on a date. Trust me. She can make any man question his masculinity and that’s no good on dates. Darbs was making fun of me last night because I didn’t know how to make my screwdriver work, she says we’ll have to get the right tools cause mine are crap.

I spent 20 minutes on the phone with Josh last night… or did I? I feel like Nancy took over that conversation. He was complaining, and that sent Nancy an invite to show her rear end. “Let me tell you about all the problems in my life right now bro”. After that phone call ended I had to ask Cora to sage my room to clear the negative energy that was just brought in. Cora thinks she’s a witch. I’ve got to hand it to her for keeping things interesting. However she left a candle burning last night that gave me a wicked headache this morning. Thought about burning her at the stake but I may need her around to poke a voo doo doll here and there. Nancy hates that we sage behind her every time she leaves the room, but like I told her, she’s contagious and I can’t allow everyone else to be infected just because she decides to show up unannounced. She’s probably sulking somewhere as I write this. 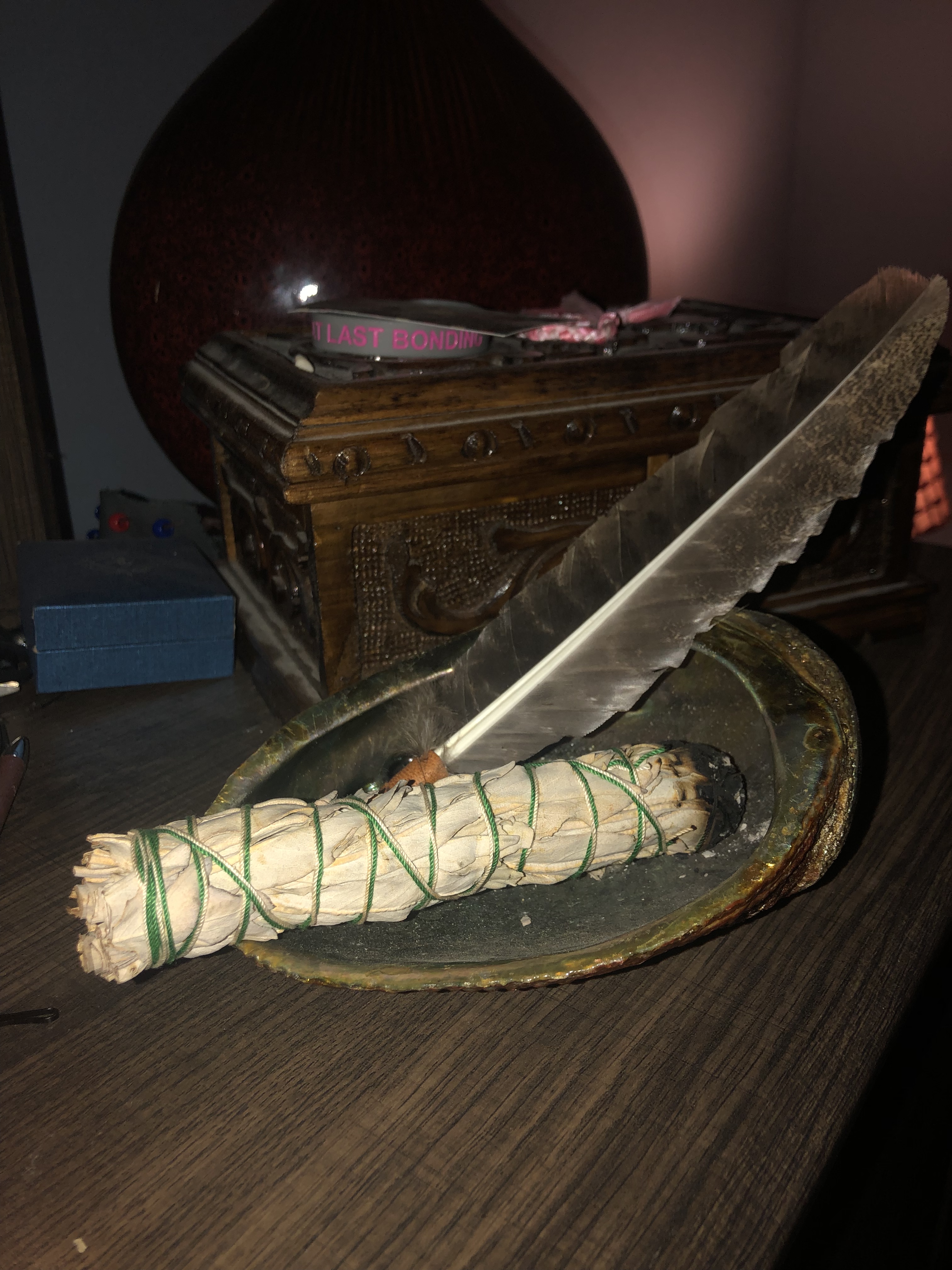 The number one thing people ask when meeting me is, “where did you come from?” One of my recent favorites was at my friends lake house, Kathy my best friend, was introducing me to her stepmoms sister and about 5 minutes into conversation she looks at Kathy and says, “where did you find her?!” Well lady that depends on which version of myself you were talking to at the moment but I’m pretty sure that was Hannah. She came about when I was around 5 years old and stepped on a piece of glass making her the worlds biggest worrier. I have to hide her when Blaze is around. She calls it involuntary seclusion, I call it getting rid of mom while we have a fun time. To each his own.

Blaze is one of my favorite sides but man oh man is she reckless. She has absolutely no rules and creates disasters for the rest of us to clean up… Blaze is the chick that keeps these guys lingering on months, even years after it’s over. She is so dang charming it sickens me. She’s one of the personalities I hide from the children… they can NEVER meet her, I’ve told her this. She is too care free and irresponsible to be around children. Jenna gets along well with her, Jenna’s an artist and so she connects with that carefree side. If you remember my dresser idea that involved blood spats that was Jenna and Blaze conjuring up an idea together. They need to calm down.

That’s my inner monologue for the morning. No I don’t actually have multiple personalities that I know of, we all talk to ourselves sometimes, I’m just weird and assign them names. I’ve seen you do it, don’t lie. If you’ll excuse me Rose needs to get ready for work.

This is a text widget. The Text Widget allows you to add text or HTML to your sidebar. You can use a text widget to display text, links, images, HTML, or a combination of these. Edit them in the Widget section of the Customizer.